Meditation for the Second Day of the Days of Awe

By my handy Hebrew timer app, I should be lighting my candles around 7:39 tonight. I’ll have to do it earlier than that, though, and my timing won’t be as good as it could be. My partner is not off work until 6:30 and he’s running two errands AND picking up our guest on the way home; the chance he’ll be here before sundown is very, very low.

So, this is me being a pragmatic Reform Jew. I’ll adjust. Candles will be lit at 7, kiddush (and ha-motzi) will be said right after, and then I’ll cook most of the meal that can’t be served until probably 8:15. HaShem will understand. 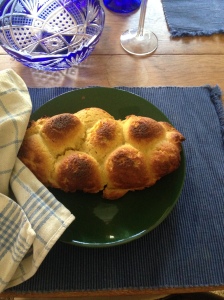 That is the gluten-free “challah” that I made myself today. I used this recipe, with a couple of tweaks: I used olive oil (vegetable oil gives me problems) and Bob’s Red Mill Gluten-Free All-Purpose flour. My other flour was coconut flour. I would have used coconut oil but I couldn’t get the jar open (sad face).

The recipe did NOT make enough batter to fill up the mold I bought from Amazon, however, so I’m thinking about buying the smaller one too, and perhaps even one that makes chalets. But first I need to know how this turned out, and I don’t, not yet. I also need a whisk (ours broke when we moved here); I had to make do with a fork when the yeast was proofing, and it didn’t bubble much.

There’s the Kiddush cup and candlesticks I talked about, too, with the challah decently covered. Please ignore my ebook in the background. I’ll be setting the table once everything’s in the oven and on the stove.

I still have some pre-prep to do (onion chopping, mainly) for the dinner, but most of the dishes are ready to go, so it’s mostly “combine these things and put them in the oven/on the stove” at this point. I’ll save most of the challah for my partner and our guest, and just have a little bit myself to say the prayers over, since I don’t want to make either of them uncomfortable.

I had lunch today with a Jewish friend who greeted me with a hearty “Shabbat Shalom!” as he walked up to me outside the restaurant. I was caught almost off guard and then was able to repeat it back. I don’t think we got any stares, even though we talked incessantly about Judaism and my conversion process both before and during lunch. This friend is not even observant, but he’s glad for me. (He said “Just don’t schedule your conversion simcha during my qualifying exams!” – he’s a graduate student friend from grad school.)

The book I’m currently reading – Diamante’s Choosing A Jewish Life – says that one of the things that the beit din look for during the interview is the use of “we” and “us” instead of “you” and “they.” All during that conversation it was “we” and “us,” pretty much, with a few exceptions when I was alluding to my life before deciding to convert. And it felt natural. It felt totally natural.

Yes, HaShem. I see the helicopter.