Hanukkah Redux, and a poem.

What do you say about Hanukkah when it’s your first-ever celebration of it?

Well, first, you might want to look up the order in which you’re supposed to put the candles in the menorah. The first two nights, I did it wrong, as you can see from the photos. My Jewish best friend, who is very tolerant, said nothing while we lit the candles on the first night, which she was here for, and for which she sang the brachot (although I sang the Shehecheyanu with her). 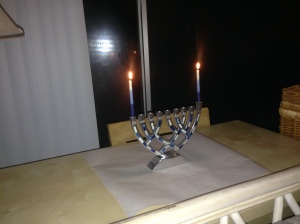 After that, it got better:

Getting my phone to take photos that were clear seemed to vary from night to night.

The fourth night was Shabbat, and we had friends over. That was the first night I tried to sing the bracha (apart from the Shehecheyanu on the first night). I didn’t quite succeed. That was one of the three gift-giving nights. I gave my husband gifts on the first day and the fourth day: a new sheet set, a small pillow he liked, a book, silicone baking sheets, and other stuff. The friends who came over got tea, wee books, pens, and a couple of other silly gifts that, in my Catholic days, I would have identified as stocking stuffers.

My best friend and I served up a great dinner of brisket (yes, an actual brisket – the first one I’ve ever cooked, and which turned out beautifully), cauliflower-leek soup, gluten-free challah, grape juice, and lemon-Worcestershire Brussels sprouts (don’t knock it until you try it!). Oh, and of course latkes with sour cream and applesauce and, for the brave, cranberry sauce (because it’s wintertime, that’s why).

And my husband made a bread pudding that, with vanilla ice cream, was to die for. Even with Los Angeles Friday-night traffic, we had a splendid time with good friends who are like family.

The next day the husband and I made it to services at the shul for the first time in a month due to work schedule conflicts. We got to see a very poised young Bat Mitzvah lead the Shabbat Hanukkah service, which was wonderful. After that, we picked up my kids and brought them back here for an overnight visit.

That night, the fifth night, my older daughter reluctantly gave up the desk for us to light the candles (right after we did Havdalah). We gave the kids books that they loved and which they spent most of the next day with before they went home, and we had a mean game of dreidel (which my daughters won).

The sixth night, it was just me and the husband again. but I think this is the best of all the menorah pictures we got.

On the seventh night of Hanukkah, we had another guest over to dinner, a friend of mine from grad school. She got there early with a ready-to-cook chicken in hand (which I roasted for dinner), asked question after question, put up with me playing music and singing and reading from the siddur, and stood by and witnessed me and the husband lighting the candles (him) and singing the brachot (me).

Finally, on the last night of Hanukkah, my best friend was here again. I sang the first bracha and she sang the second while my husband lit all eight candles. (Sorry about the blurriness of those flames; I tried several times and I couldn’t get the picture to be clear no matter what I did.) My best friend told me later that she watched me sing, and saw and heard a Jew singing, which is an enormous compliment in my opinion.

So, how was my first Hanukkah?

Well, here’s a poem for you.

I sing the brachot
Shocheradam

I sing the brachot.

Today we realized we’d been doing the lights backwards, so we switched them. Hubby read the siddur (in English, after stumbling over “b’mitzvotav” one too many times) and I lit them.

Tonight our intentions were said as the candles were going out. Mine was for my students, and hubby’s was for our marriage and its success.

A continued Chag Chanuka Sameach to you all.

So last night was my first day of my first Hanukkah ever. (I will be using “Hanukkah” in my English writing and “Chanukah” when I write in Hebrew transliteration. Just sayin’.)

My Jewish best friend came over, helped me get through errands that I couldn’t avoid, made a fabulous dinner (she wouldn’t let me help) AND brought me and my husband gifts.

For him: A Jewish Study Bible (one of the books on our Intro to Judaism textbook wishlist). For me: another of the books from that same wishlist.

She also brought gelt and a dreidel, and taught me how to play. I had bought a set of very pretty dreidels that were also delivered yesterday, as well as a box of dark chocolate gelt. It was very fun.

My husband was blown away by her gifts. And when we lit the candles, we each stated our intentions for that first candle: me for my late father, my husband for one of his best friends who had died recently, and my best friend for my husband – that he is also joining her People along with me. He got teary-eyed. It was sweet.

We put the menorah in front of the window. The shamash is the one on the far right (and yes, it’s a little taller than the other candle holders in this menorah). My friend lit it and taught us the song for the prayers – which are in our siddur, thankfully. 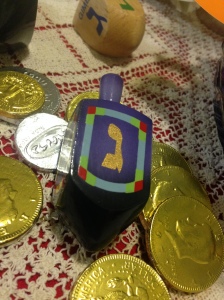 That’s the dreidel that my friend brought, up-a-top. The similar-sized one from the set I purchased is lying among the gelt. (Note: we have silver gelt and gold gelt both – the silver is the dark chocolate type.)

We have holiday plans for Friday evening; friends of ours who are chosen family (including my Jewish best friend) are coming over for Shabba-nukkah (Shabbat during Hanukkah?). I have a brisket waiting to be cooked with apples and red onions in the slow cooker; my husband is planning bread pudding with gluten-free artisinal bread we got from our local gluten-free (and Jewish!) bakery; apple fritters; challah from that selfsame bakery; brussels sprouts with capers and lemon juice – it’s going to be a good feast. I’m hoping that my friend will also make us latkes; we’ll have sour cream and applesauce for them, for sure. Sufganiyot won’t be possible this year because the bakery doesn’t yet have the deep-frying ability to make them, but hopefully by next Hanukkah we’ll have those as well.

I also plan to (and resign myself to) gaining ten pounds over the next few days. Hey, it’s the holidays. I’m allowed.

We’re also having to take the husband’s car in to the shop to get the window repaired – it stopped working yesterday, which would have been fine if it had done so when rolled up. Doing so when rolled down was less-good (it was pouring rain last night). We are also going to go get our new cat, we hope, tonight. Our previous fur-kid died in early February, and it took a while for both of us to be ready for a new one.

In the meantime, I have a few more grades to finalize, a house to clean up, and students to manage in a wintertime class. If you’re so inclined, keep a good thought that I hear back positively from the job I had a second interview for a week ago. They said “late next week,” so that’s now “late this week.” I can hope they’re going to call today or tomorrow, right? And in the meantime, I’m not going to worry about it.