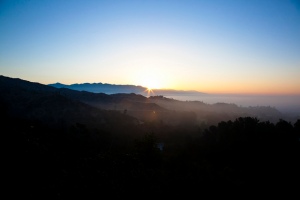 Things looked better on Shabbat morning. And fortunately, that continued for the rest of the day into our afternoon at home and our evening with friends.

Things usually do look better in the morning, did you ever notice that? Something about sleeping on it really does help fix most of the problems of low spoons, lack of energy, and general overwhelm.

Of course, I was trying too hard. I was trying to live by every rule, everywhere, to be a perfect Jew, even as I had admitted that it’s okay not to be perfect. There’s a definite difference between saying it and practicing it, and G-d called me on it on Friday, I think. I was at the end of my rope, frazzled, tired, worn out, overwhelmed, and still thinking I could somehow put together the equivalent of a holiday dinner AND bake challah for the next day’s temple Kiddush service when I was almost completely out of cope and energy. I was convinced that I could still follow all the rules and make things somehow come out perfectly even though I was scraping the bottom of the energy barrel.

Reality. It hits you in the strangest ways. Obviously none of those things happened. I’m just glad that the fallout was a few pieces of dough hitting the coffeemaker and the carpet, and nothing worse than that (like a cut hand due to a knife accident, or a concussion because I slipped and hit my head on a wet floor).

It occurred to me this morning that one of the things I find so healing about Judaism is that Reform Judaism is not a rule-bound system. I grew up with a strong and frightening sense that if I didn’t follow every rule perfectly, all the time, to the letter, then I was in big trouble. Yesterday’s experience at temple in the morning, where I participated in the mid-service Torah study, and where I was reassured that everyone has had kitchen disasters and not to worry – we’ll love to try your challah next week, showed me it’s the spirit of the law, not the letter of the law, that we’re trying to get at here. People (and G-d) don’t expect perfection. They expect an honest effort. They don’t expect me to do it all correctly the first time. They expect me to focus on doing my best to do a little bit better next time.

It’s not about perfect adherence to the rules. If that was all it was, any religion would do.

My life before Judaism didn’t allow a lot of time for contemplation or doing things deliberately. Due to some disabilities I have, for example, getting dressed in the morning can be a very complicated process. If I put on my jeans before I put on my socks, it’s harder to reach my feet, for example, because that restricts motion enough that bending my knees far enough to reach my feet becomes almost impossible. But there have been times when I’ve been rushing because I feel like I’m late (I rarely am) and then I have to undress and start all over again, usually berating myself for not paying attention well enough. Eating deliberately? What’s that? I have still caught myself being halfway through the meal before I realized I haven’t really tasted it (and that I haven’t said the brachot yet), and then kicked myself for it. I wasn’t raised with the habits of deliberation or contemplation. I was raised with the habits of rushing, doing it quickly, getting it done, and getting on to the next thing. While going to church was calming, it was only one hour a week. That’s not enough to get used to being calm and quiet (and for me it was always upset in the middle by the angry sermons I had to sit through).

But with Judaism (at least as I’m practice it), it’s not about rushing out of bed and running around like a headless chicken trying to get six things done before breakfast so that things are always perfect. It’s about staying in bed when I wake long enough to remember to say the Modeh Ani before I get out of bed. It’s about taking the time to remember to say the brachot over my morning coffee. It’s about remembering to slow down and take time so that those become things I remember before I need to do them, not after. It’s about taking an entire 24-hour period every week to NOT rush, to NOT hurry, and to let that peacefulness carry over into the rest of the week. It’s the complete opposite of what I was raised with – reflection, rather than rushing.

The rushing seemed to me to be required. If you aren’t running around “looking busy,” you’re lazy, aren’t you? But then I wonder how many people would call a Buddhist monk “lazy” for his meditation practices. I know a few Westerners who probably would, but that’s not the point here. The Type-A personality should not be setting the standard for what reasonable effort looks like – they’re at one end of a very long spectrum. It is possible to be unrushed and not be automatically lazy. It is possible to take time to think and contemplate and not be lazy.

And it is all right to take a day where rest, contemplation, consideration and thought take precedence over running around trying to do everything all at once. It is all right to live by the spirit of the rules as much as, if not more than, their letter. A blogger I follow on Facebook calls this “living hands-free” – to stop worrying so much about what everyone will think and start focusing on the moment, the process, rather than the goal.

This is still very hard for me to grasp. We live in a culture that values speed and efficiency and the goal over reflection and deliberation and the process. But living a hands-free kind of life – which for me, more and more, means a Jewish life – demands adherence to the spirit of the rules over the letter of the rules, more often than not. It’s also about bringing that sense of reflection and consideration into the rest of the week, not just leaving it on Shabbat. I had had an entire week of no reflection or consideration, of feeling rushed, of trying to do too much at once, and I paid for it on Friday evening when things finally fell apart because I couldn’t keep all those balls in the air and the plates all spinning at the same time.

And next week will take care of itself. It always does – have you ever noticed that?

When you have depression (as I do) it’s very easy to fall into complaining. Not because you’re a whiner, but because the world really does look that bleak and it really does feel that bad. It’s hard to find positives when you are depressed, sometimes.

I’ve had a rough couple of days with this year’s academic hiring cycle starting up, and realizing that my best choices for a tenure-track job application are not in the city I live in, or even anywhere near it. This troubles me because I do not like change and I’m afraid to leave the familiar area I live in. I also don’t travel well – I dislike vacations that involve Going Somewhere New, and don’t understand why people want to do that when they could stay in their home and relax.

The academic job process for a professor hire usually involves a one- to three-day-long on-campus interview where you are on display all the time. From the moment your plane lands in the airport and you are picked up by one of the hiring committee or a graduate student, you are on stage. The only time you’re not is when you’re in the hotel room that the hiring school is paying for you to stay in. It’s a grueling process even for people who are not autistic. When you’re autistic and you have phobias about new places, though… well, let’s just say I’ve done this four times now and had no offers in two years, which is really, really depressing for me.

This year I’m going to focus mainly on places I’ve been (to cut down on the terror of “this is a completely unfamiliar place”) and that are within two to three hours’ flight of where I live now, for several reasons: my kids, my best friend, and my brother and his wife and kids all live here. If there’s an emergency for any of them I want to be no more than three hours’ flight away from them. But that still means that (assuming I get an offer) I will have to face moving away from everything familiar, and that is not easy for me to face.

Then there’s the interview itself. Again due to the autism, I freeze when I’m around strangers. I am going to work very, very hard on pretending that they are not strangers so that I can do what I need to do. But I do not expect that to work, because at my core I’m a pessimist and, well, I’m angry that I have to go through this just to get a job that will support me and my family.

So there’s a lot of stressors, as you can see. Disclosing the autism is not an option. Neither is disclosing the depression. So I have to pretend to these potential future colleagues that I’m just fine, peachy keen. Which brings up its own set of issues, but anyway.

There’s also the points that Telushkin makes in the Book of Jewish Values, about how asking cheerfully is not a choice, and that we should occasionally go on a “complaining fast” and remind ourselves of what we’re thankful for. Kvetching may be culturally Jewish, but being thankful is spiritually Jewish. And I need to remember to be thankful, even when things look dark or frightening or both.