Countdown -7: The 5th of Elul and Accepting

Today is the 5th of Elul, which is one week until I officially become a Member of the Tribe. 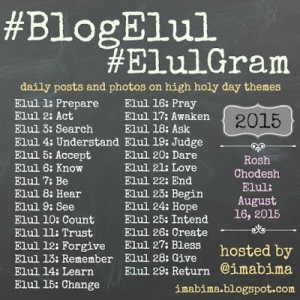 So today’s theme is “Accept.” Hoo, boy. I’m not sure I even know where to begin.

In our class yesterday, we discussed the idea that in order to change, you have to begin by not changing – by accepting who and what you are, where you are, right here, right now. For a lot of people that’s a really tough thing to do. I know it is for me. I’ve been fighting with this – wrestling with it, if you will – for all 44 years of my life. There’s always something preventing me from accepting who and what I am, where I am, right here and now.

So I guess I’ll talk about acceptance by talking about that.

Part of yesterday’s lesson in class, which came from the outstanding book God Was in This Place, & I, i Did Not Know by Rabbi Lawrence Kushner, really hit me hard. It was the part where the book says that in order to improve yourself, or better yourself in any way, you have to accept your starting point. The class got very exercised about this point. One person said “But then how can I better myself, if I accept where I am right now? Isn’t that like giving up or giving in?”

I (and several others) brought up the idea that we focus too much on the goal, or what we think we “should be,” instead of the process, or how we get incrementally closer to the goal, as the main point in change. For example:

But isn’t the truth that God finds you acceptable right now, as you are, even though you’re not perfect? Doesn’t acceptance, at its heart, come down to being okay with not being perfect? Because the truth is, none of us can be perfect, no matter how driven we feel towards perfection.

This brings up another lesson I’ve already learned before, but I’m seeing it in a new way. (Judaism does that to lessons, I notice: Turn it and turn it, for all can be found in it.) The lesson I’m thinking of is the one that says “When asked if you are keeping kosher/giving 10% of your income in tzedakah/whatever, a good answer is ‘I’m working on it.'”

Why are we so unwilling to say “I’m working on it” instead of “I’ve got it done/fixed/handled?” Why are we so prone to demanding completion rather than process?

Robert Merton, in his theory of institutional anomie, said that the American society is far too focused on the goals and not nearly enough on the means of achieving those goals (aka the process). Is it a human condition to focus on the goal rather than the process? Or is it simply a condition that we’ve created for ourselves in this hectic world where you don’t eat unless you have a paycheck?

It might seem that I’ve strayed far afield from the idea of “accept,” but I haven’t, really. Because all this is, is accepting where we are, right now, isn’t it? It’s accepting that a goal is not the be-all and end-all, that process is the real thing, and that being 1% better than you were yesterday could mean a 365% improvement in a year, if you did it every day.

But to do that, you have to accept where you are as the starting point.

Where are you today? Right here, right now, what do you need to accept in order to move forward?

Look down at the starting line. That’s where you are, right here, right now. The finish line will wait for you.